Once again I find myself at the end of the month with a Doodle snickering at me as it looms over my crowded empty brain. Perhaps you are wondering how a brain could be crowded and empty at the same time. All I can say to that is you must not be a mother. Crowded emptiness describes the perpetual state of the mother brain. I need to write a poem about that. But first I must get on with this Doodle!

October has been one doozy of a month around here in so many ways. Moving our middle daughter to Chicago dominated all else. Oh my, what an exhausting business moving can be, even when it involves just one and a half rooms’ worth of possessions. Evidently this particular daughter had been moonlighting for years as some kind of expert in space conservation techniques. The stuff just kept rolling out of there like candy on the I Love Lucy conveyor belt!

Somehow we lived through the actual move, with the help of an angel. He showed up in the nick of time to help us lug the second of two sleeper love seats up a flight of very narrow steps. I literally (yes, LITERALLY) saw my life flash before my eyes as Erin and I lifted from the bottom and Bret heaved from the top to get the first one up the steps. One slip and one of us females would have been maimed or dead. So I was praying for an angel to appear to get that second one up there. I thought maybe it was the landlord when he appeared out of a door at the back of the building as we prepared to take the second sofa off the truck. But no, he didn’t volunteer. So we forged ahead on our own, wheeling it down the side of the building on a dolly to the hideous steps. As we were finagling it into position for the heaving, I heard a heavenly voice call out, “Do you need some help?” YES! We definitely needed help! So a big, burly hispanic man came trotting from a van he had just driven up to the building, manhandled that thing ONTO HIS HEAD (observing “This is heavy!”) and away he and Bret whisked that monstrosity up the stairs! I assumed the man was Jose, the maintenance man that Erin had met the week before when she had traveled up to the city to move a carload and do some business, but Erin wasn’t sure since she didn’t remember what exactly he looked like.

Fast forward to three days later. Erin had seen a mouse in the apartment and could not find mouse traps in any of the nearby stores. (This is the girl who just days before had yelled for her daddy to kill a spider, so I was concerned with how she would handle disposing of a dead mouse once she found some traps.) She texted me that Jose had been cleaning the back stairs so she had talked to him about the mouse problem. He had promised to bring her some traps (which he did) and he said if she caught one to call him and !ANGEL ALERT! he would take it away! I texted that I had known Jose was an angel when he helped with the sofa. She texted back that Jose might be an angel, but he wasn’t the same one who had come to our rescue with the loveseat. WHAT??? Wow! Two angels in less than a week! God is so good!! Really, He has shown Himself to be so compassionate to this emotional wreck of a mom this month, not only in the major details of this move (like providing a 10 foot truck with an AARP discount when supposedly there were no affordable 10 foot trucks available anywhere within 100 miles of us) and the very small mousy details that would keep me up at night just wondering how my daughter would be able to deal with them.

This has been a major month of learning just how trustworthy the Lord really is. And I’ve learned just how capable my daughter is also. She’s downright amazing! Letting go is never easy, but letting go of a daughter, who has never lived anywhere but our small town, into a huge city all on her own, took more fortitude than her parents could have come up with by themselves. Jesus has walked very closely with us through this transition. I know He has spectacular plans for Erin! We just need to get over this whole quiet house thing. I suggested adoption to my hubby, but when he came out of his swoon, he gave me the look that said, “Please never mention that again”, so I guess the quiet will remain, at least until everyone comes home to visit. Yippee!

So what does any of that have to do with fall leaves, frappés and funny friends? Well, let me tell you. I love autumn and I recently discovered McDonald’s caramel frappes, which got me through many days this month, and I have some funny and lovely friends who have encouraged me through my emotional breakdowns. One friend in particular never fails to make me laugh. We went out on a little drive to view the leaves together today. She suggested we get some frappes to enjoy along with the view. We laughed and cavorted over hill and dale. (Well, the cavorting was mostly in our heads–our bodies don’t cavort like they used to.) On the way back she mentioned that we were experiencing a day of “fall leaves, frappés and funny friends” so I stole that alliterative line for my title, with her permission, of course. She also sent me a link about how and why leaves change colors in the fall. It also explains why some autumns are more spectacular than others. Read it HERE to be astounded by God’s creativity.

And you know what else is astounding? This year the colors did not reach their peak until this week, which is at least a week later than usual. Because of the stress of the move and the emoting involved afterward I could not have enjoyed them fully any sooner. I take that as another gift straight from God’s heart to mine. Look at this photo and sing a little worship song with me–How Great is Our God–then come back next month for another episode of What’s Got Debbie Stirred Up This Time? 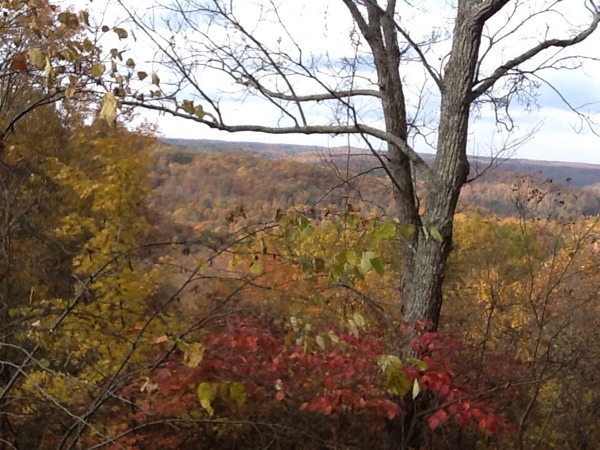