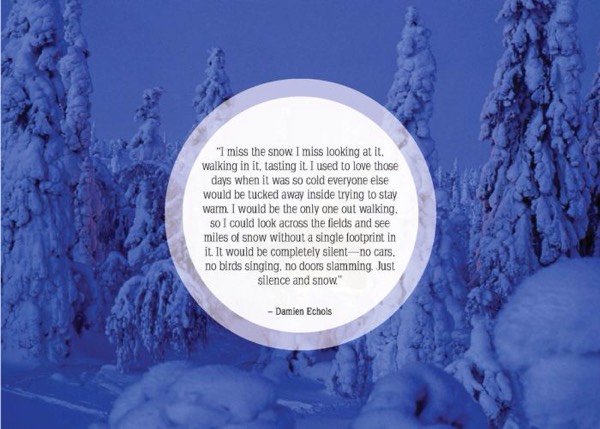 Growing up in the Kansas City area of Missouri, I saw a lot of big snows and the above quote speaks to me. I remember well waking up on mornings when the world was silent. I knew before I got out of bed that snow had fallen overnight and the world would be magical when I looked out the window. Schools didn’t close very often where I lived. I remember one time when there was over a foot of snow on the ground and school had not been called off. I waited at the bus stop for nearly thirty minutes before my mom called me in to tell me that school had been cancelled after all because a couple of buses had slid off the roads. That doesn’t happen around here. If the roads have a coating of snow, school is out, or at the least, on a delay.

Well, welcome to the land of the frozen and the home of the raving lunatics! For the past two weeks here in Kentucky we’ve been snowbound for the first time in many years. I’m one of the raving lunatics who enjoys a good snow. By a good snow I mean one that shuts everything down for a few days so the majority of us get to stay home from all the scurrying about that we normally do. I realize that those in the medical and law enforcement fields, postal workers and all the crews who work to clean off the roads have to get out in the weather no matter what, so I don’t wish for more snow than can be scraped away in a couple of days. But every now and then God blesses us with a rootin’ tootin’ whambang of a snow storm like the one we had last Monday. It was so much fun to watch the beautiful flakes fall outside my nice cozy sunroom, something I had been looking forward to since the room was finally finished at the end of the summer.

This storm ended up closing down most of our little town for the better part of a week because of the depth of the snow (about 8-10 inches in Corbin) and the arctic cold wave that descended immediately after the storm. Then more snow came and more arcticness, making all but the main roads impassable for non-4WD vehicles for about a week. My dentist employers closed down shop since most of their staff couldn’t make it in for the one or two patients who might brave the roads to get their teeth worked on. I had an entire week off plus a weekend at each end, the most amount of time off I’ve had in one stretch to actually relax since becoming a mother thirty years ago! Every day as I headed toward the sunroom, I heard in my momishly-warped brain the voice of Barbie chirping on a toy phone my daughters used to have, “I’m going on Snowcation!” Barbie actually said “vacation” on the phone, but I heard SNOWCATION, which intensified the chirpiness in my head and the giggling in my soul.

I enjoyed every minute of my snowcation captivity with not a hint of cabin fever. I read books, wrote poems, worked on my supposed novel (someday I hope to be able to edit out “supposed” when mentioning this), slept on my personal best schedule (12am-8am), ate whatever and whenever I wanted, stayed in my jammies most of the time, lollygagged through some housework, gained some weight which I then walked off with the help of my handy dandy iPod pedometer, and enjoyed some quality prayer and Bible time. Towards the end of my snowcation I was beginning to feel the need for the snow to melt, mostly because I was going to have to get out and drive myself to work again. Thankfully my hubby has a 4WD, so I confiscated it and left him to handle maneuvering the minivan. That was a wise confiscation on my part since driving on the large, uncleared parking area at my employers’ house was like an amusement park ride, bouncing over rock-hard mounds of snow and sliding around on ice patches several times a day trying to get the kids to various activities that continued even though schools remained closed for all of this week but today. Mercy! Snowcation was nice, but now all of us, especially those poor raving lunatics who don’t enjoy snow at all, are ready for spring!

Even so, I agree with the sentiment expressed below. For those who don’t agree, just remember that spring will be all the sweeter after this winter!