Whooooo Do You Want to BE?

This year’s experiment in Being, including writing only when the urge hits me, isn’t working too well for me. I write much more when I have a deadline, whether for a contest or a self-imposed one for doodling in this space. When left to my own lazy and distractible ways, I do what’s easier or more in-my-face-making-me-crazy. And let me tell you, this year so far has been full of crazy distractions, especially this summer.

The trip to Italy in May took up most of my brain waves from March through the beginning of June, when we returned from our adventure. Said brainwaves were then immediately sucked into the vortex of renovating the half bath off the library that used to be middle daughter Erin’s bedroom. This needed to be completed by the end of June when she would be moving back into her bedroom to figure out her next step in life. Even though I did none of the actual work on the bathroom (my husband prefers to avoid klutzy Debbie-catastrophes by doing house projects himself), I still needed to think about whether I approved of what was happening in there. That takes a surprisingly great deal of energy out of my head, since I usually don’t approve of at least one something that my husband thinks will look great. I ponder and suggest and prod, until I decide to give up and let him do what he likes, which generally turns out looking great, just as he said. I should never ponder at all, but he always asks my opinion, and since we rarely agree, it’s his fault that I fall into an exhausted vegetative state watching him yank out toilets and sinks and flooring and commence to hammering and gluing and painting and installing lights. He insists on doing it all his way, so I let him. I am such a submissive wife!

Most of July I spent on writing a booklet for a special celebration for our church. That was nerve-wracking at times, but not as much as planning a trip to Italy, or choosing a new toilet, sink, and wall color. Then we (I talked him into it) needed to replace our 22-year-old living room furniture, so we had to shop for that, and figure out what to do with our not-good-enough-to-sell old stuff. Thankfully, a church in town has a homeless ministry that not only would take it, but come get it! Praise Jesus! Since our new furniture would not be available for delivery for four to six weeks we (I talked him into it) decided to repaint the living room and hall, since waiting until next summer would be stupid.

That takes us to this present moment. I have time to write a doodle right now, because our new furniture arrived a few days ago, and after much shifting (including rearranging the sunroom to accommodate my moose cabinet that didn’t look that great with the new furniture in the living room), pondering shades and drapes, drilling and re-drilling holes in the floor to fit the television cable through, and coaxing the dog to take up residence on her new bed in the corner of the room rather than on the new rug, we are finished! Except for the new idea Bret had for building a focal point out of distressed wood on one wall (all his idea–I had nothing to do with it), finding a chest of some sort for all of Loosie’s dog toys and slobber towels, finding the drapes/shades we’ve pondered over forever, maybe looking for a larger aquarium to house fish people can actually see without a telescope, and going through all our many pictures to decide where to place them all over the house.

In the meantime, I’ve been trying to be artistic, in a BE! sort of way. Having a daughter living with us for a while again has inspired me to be angsty about my lack of creativity in the visual arts realm. All three of our daughters have a gift for making art. They get it from their daddy with his “this will look great!” brain. I don’t have that gift. I can write poetry, but I lack whatever it takes to draw or paint something that ends up looking like anything anyone would want to look at.

I started working on a paint by number picture in January and finished it in June. It came out quite nice, but all I had to do was Paint By Number. It was extremely intricate, however, so finishing it did give me a sense of accomplishment. Then one day Erin and I went shopping at the local crafty shop. She bought a bunch of canvases, so I did also. A few weeks ago we did some painting on those canvases. I did my best to let the canvas speak to me as a I blobbed colors onto it. I call it Sunset in a Hurricane. It’s weird and messy, but at least I tried. Her paintings looked pretty.

Somewhere along the way, inspired by our youngest daughter, Carly, who has been using up scrap yarn by knitting squares that she plans to sew together into a throw, I decided to start a similar knitting project. I learned to knit in 4H in the fourth grade and I’ve made a lot of scarves, sweaters, baby blankets, and throws over the years. I enjoy knitting and generally I can follow a pattern without too much trouble. I’ve never tried making anything without instructions, however. I figured that if my daughter could do it, I could do it! So I commenced. I decided to knit squares in different patterns from some skeins of yarn I had picked up because I liked the colors. As I knitted the first square, I thought, “I think I’ll make a wall hanging.” Unfortunately, I forgot to write down how many stitches I cast on to make the first square and didn’t get around to starting the second one until a few weeks later. So I guessed at the number and proceeded. I also didn’t take into account that different patterns don’t always knit up the same size. And then I started on a pattern that didn’t look right as a small square, so I decided to make it three times as long to be the centerpiece the other squares would be sewn around. Unfortunately, I needed more of that color yarn to knit one more regular sized square. That’s when I slid into a funk and gave up. I figured the squares would sit around in a bag for several years until I decided to throw them out. But then Erin encouraged me to play with them. So I did. I moved them around, stacked them up, and folded them over. Suddenly I saw someone looking back at me–an Owl! WHAT?? I fiddled some more until I had a beak and some wings. Then I made eyeballs for the eye holes I had originally seen and Erin helped me make ears.

My artistically persnickety husband will not allow me to hang my creation anywhere prominent in our house, so it will be going in the grandchildren’s play room. I think he’s a cute little oddball of an owl. And he says to me “Whooooo Do You Want to BE?” I want to BE ME. Oddball-owl-making, poetry-and Doodle-writing, Jesus-loving ME! Whooooo do you want to be? 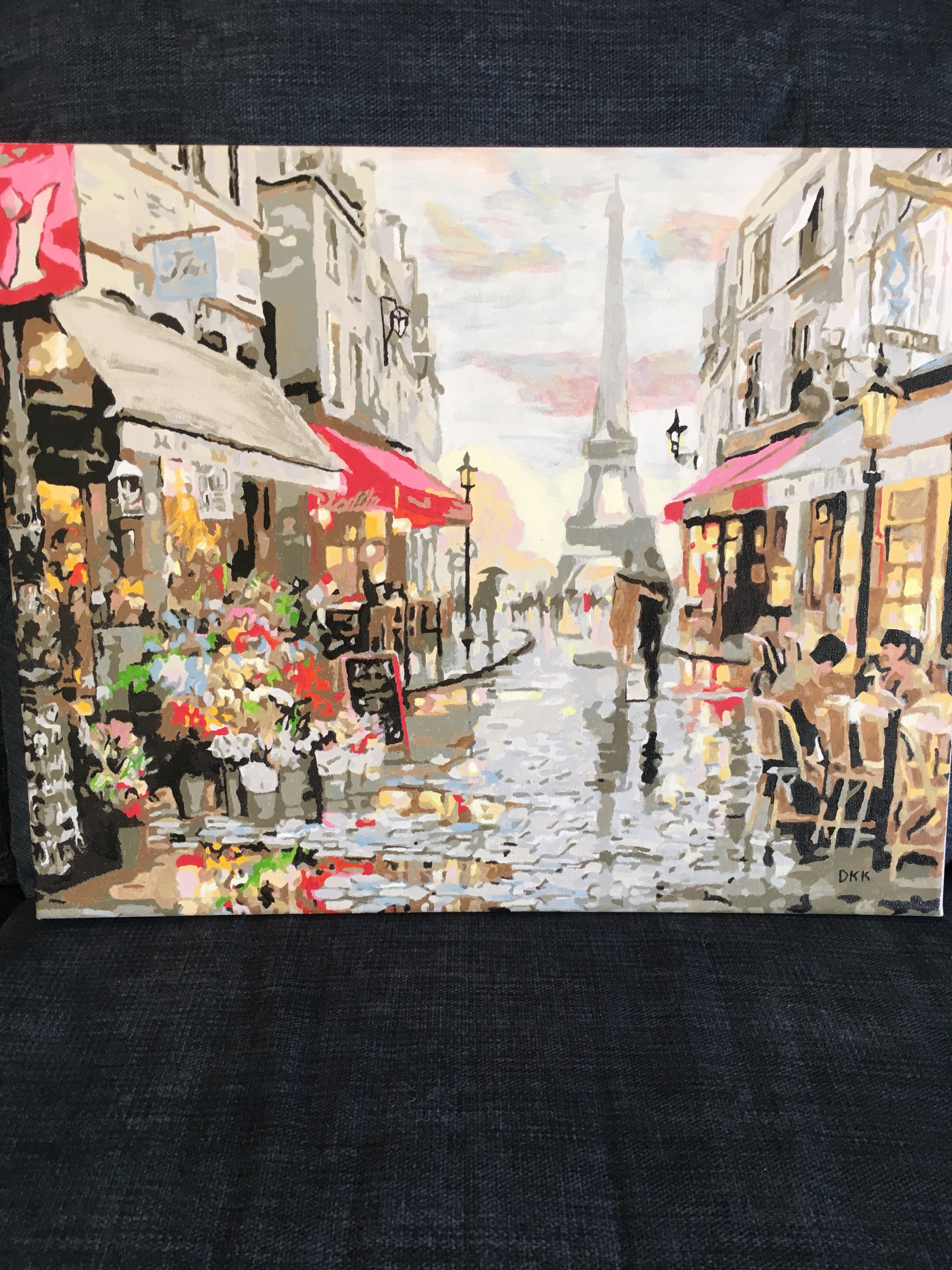 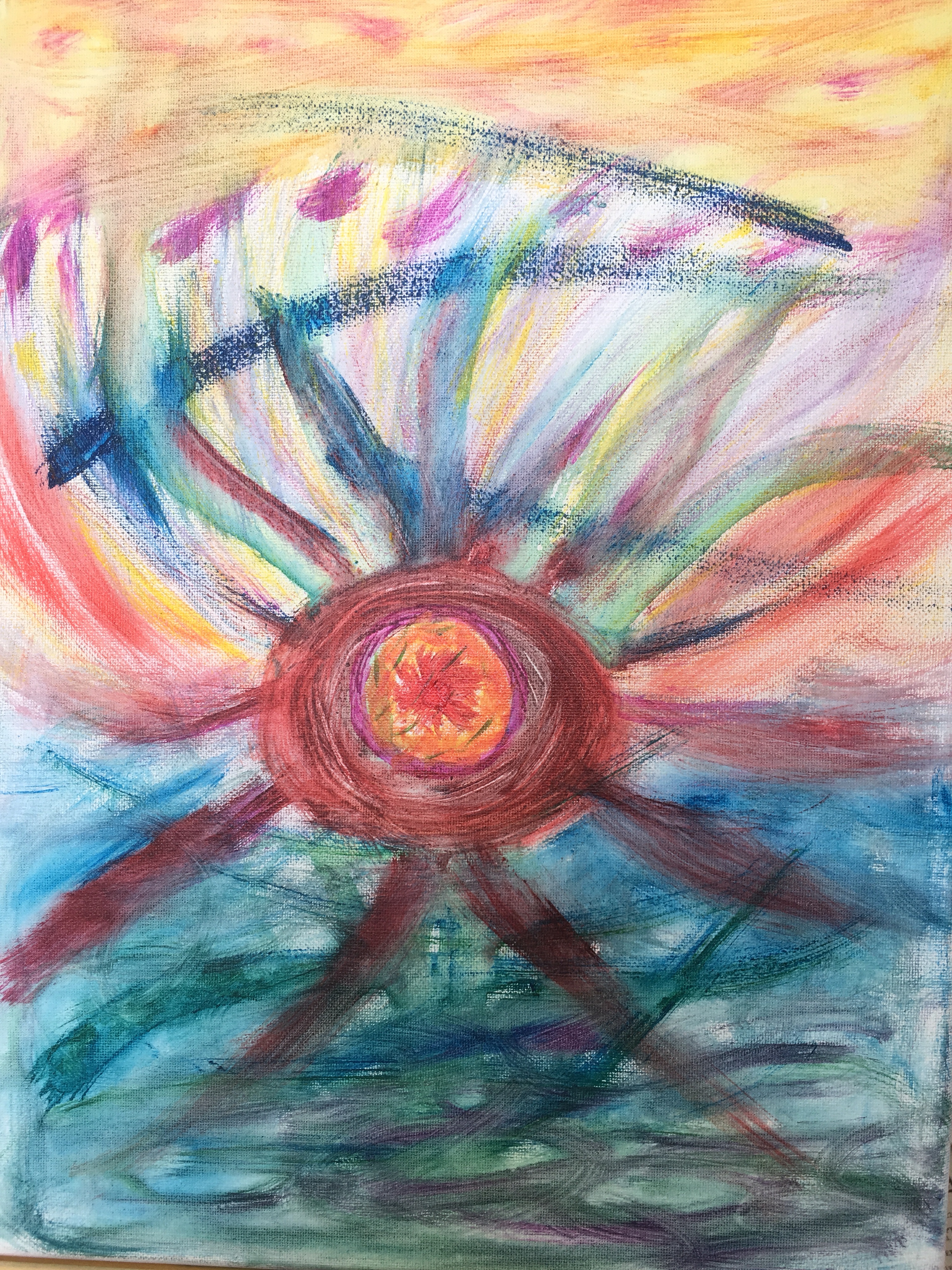 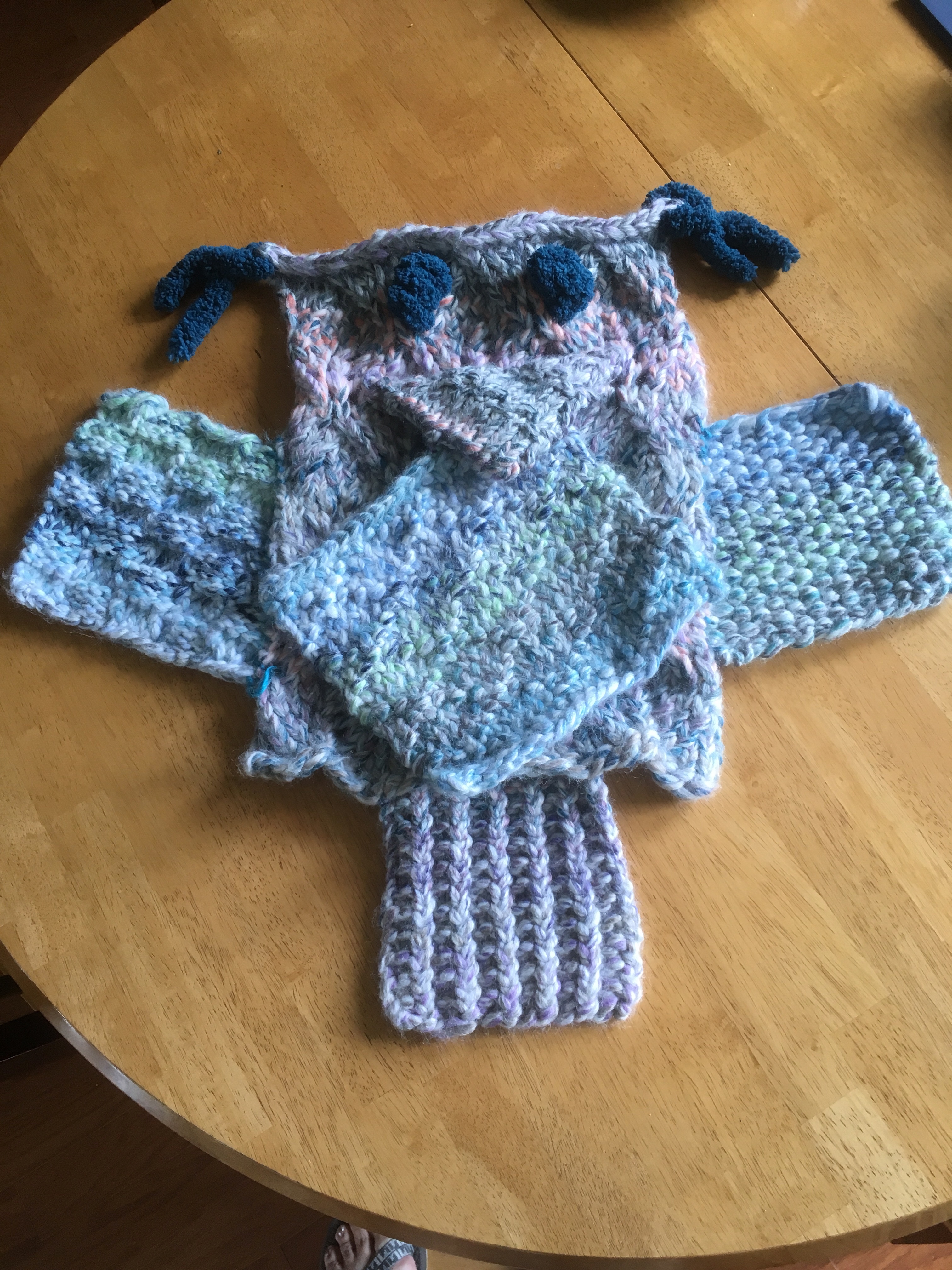